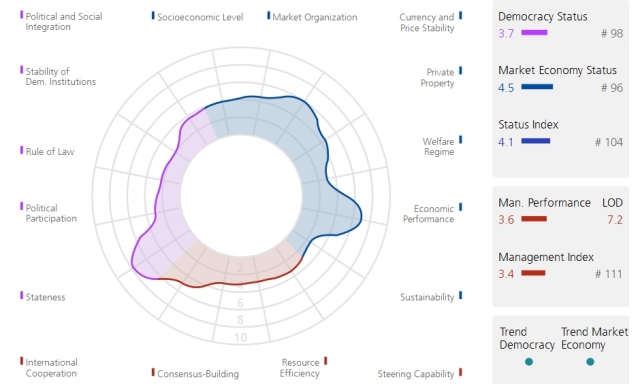 The outcome of Cambodia’s parliamentary elections in July 2013 was much closer than expected. Although the ruling Cambodian People’s Party (CPP) used various instruments to reduce the competitive character of the election, it lost more than 9% points and garnered just 48.8% of the vote, while the fledgling Cambodian National Rescue Party (CNRP) – founded in 2012 through the merger of two liberal opposition parties, the Sam Rainsy Party and the Human Rights Party – garnered 44.5% of the vote. The CNRP refused to take its seats in parliament and claimed systematic fraud in the election process, particularly regarding the use of inconsistent voter lists that allegedly disfranchised tens of thousands of CNRP voters. It organized mass demonstrations and established a protest camp in the capital Phnom Penh. This camp was violently cleared in January 2014 in parallel with a violent crackdown on a strike by garment workers. Five people were killed and dozens were injured in the process.

In mid-2014, Prime Minister Hun Sen and opposition leader Sam Rainsy – who returned to Cambodia in 2013 after more than three years abroad, avoiding imprisonment in his home country – agreed on a compromise to end the political deadlock. The government agreed to give the opposition more rights in parliament and a TV license, and agreed to overhaul both Cambodia’s election law and the National Election Committee. Although not all these promises had been implemented by the government as of January 2015, it is very likely that they will ultimately increase political competitiveness in Cambodian politics. As of the time of writing, a defeat of Hun Sen and his CPP in the 2018 parliamentary elections even looked more probable than another CPP victory.

To be sure, the government has not hesitated to employ violence and legal prosecution against dissidents in order to preserve its decades-old hegemony. However, Hun Sen has also elevated some technocrats to ministerial roles, a possible indication of a reform agenda in upcoming years. However, major challenges remain, including a lack of judicial independence, widespread corruption, and an overall lack of transparency or accountability among state actors. These elements have to date seemed untouchable within Cambodia’s development process, and will probably cause increasing dissatisfaction among Cambodians.

Cambodia remains a market economy with a weak state and only rudimentary social-welfare mechanisms. The country has struggled to preserve its competitiveness under the upcoming ASEAN Free Trade Agreement framework, which will come into effect at the end of 2015. Although the country has a prosperous garment industry, its lack of a skilled labor force, infrastructure shortcomings, legal uncertainties and high energy-production costs endanger further economic development. In addition, the government has continued to take a hands-off approach to the plundering of natural resources, indicating a lack of sustainability in the country’s economic growth patterns.

Cambodia’s relations with neighboring countries have stabilized. The People’s Republic of China remains the kingdom’s most important ally, though it does not border Cambodia. Cambodia’s has established bilateral relations with both Vietnam and Thailand, reducing the probability of further conflicts at common borders. However, strong anti-Vietnamese sentiments fueled by opposition politicians have raised fears regarding the security of ethnic Vietnamese and the stability of bilateral relations should there be a regime change in Cambodia.

For the Asia and Oceania regional report, please see http://www.bti-project.org/en/reports/regional-reports/asia-and-oceania/.

This report is part of the Bertelsmann Stiftung’s Transformation Index (BTI) 2016. It covers the period from 1 February 2013 to 31 January 2015. The BTI assesses the transformation toward democracy and a market economy as well as the quality of political management in 129 countries. More on the BTI at http://www.bti-project.org.

This work is licensed under a Creative Commons Attribution 4.0 International License.